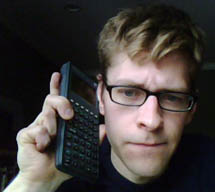 Cellular phones are stupid. There's no denying it! But if anything is worse, it's a poorly-implemented multifunction device. We've all seen people whip themselves into a frenzy over each new feature trend: cameras, music players, and accelerometer-controlled virtual beer glasses. These new features are never as good as the original thing they seek to replicate, and they do nothing to improve on the phone itself. (I think we can assume, at this point, that engineers are not spending any time fixing the most irritating problem with cellphones: the horrendous audio quality.)

But I am not opposed to multi-function devices on principle. In fact, I see one combination—yet unexplored—that has potential to be really big: the calculatorphone.

I’m not talking about replacing the $2 four-function calculator you bought at CVS in 1995. I’m talking about replacing a graphing fucking calculator. The real deal. With hard plastic buttons that go click. And a nice display. Had you noticed that dialing a cellphone—entering a number followed by the “talk” operator—is a form of postfix notation? That’s RPN, bitches! And all those number buttons? If you put the 7 above the 4 above the 1, you have a calculator!

I still use my HP-48GX calculator. Yes, it was designed in 1993. And yes, I finally agree that 128K of RAM is a little on the small side, and the 4 MHz Saturn processor is a little sluggish, and Xmodem isn’t the slickest way to transfer files. But the design is still ingenious, the size is just right, and the quality of construction is first-rate. Perhaps with a phone thrown in, there would finally be an incentive to update the design with some new hardware. Just think how jealous your iPhone friends would be when you pull out your calculatorphone! Yes, that button really does say “arctan.” Can you hear me now?