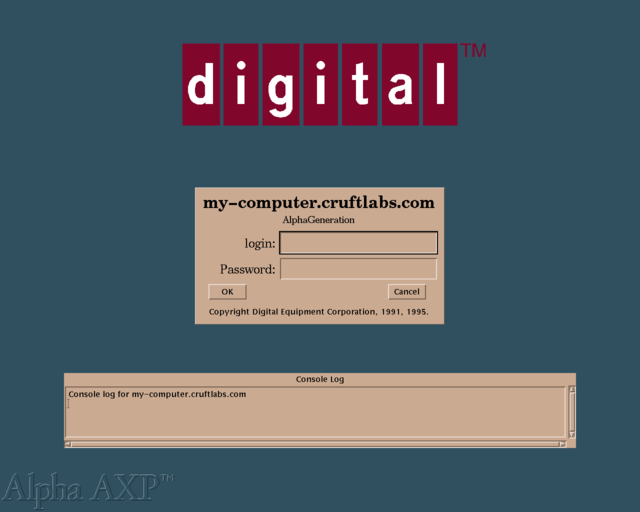 Last weekend I retired my trusty old Digital AlphaStation 200 4/233. When it was introduced in 1994 (retail price: $15,595 with UNIX and a 1 GB hard drive), it was one of the first 64-bit computers intended for desktop use. At that time, a 90 MHz Pentium was considered top-of-the-line for desktop computing, and this sucker was screaming at 233 MHz! When I bought one secondhand from a co-worker for $200 in 1999, it was still a reasonably fast machine.

At some point, I outfitted it with a 9 GB Ultra2 LVD SCSI drive and it became my primary workstation. I briefly ran Linux on it, but soon discovered that Tru64 UNIX not only ran more reliably—in fact, it never crashed once—but that it contained some interesting security, clustering, and filesystem capabilities that were way ahead of their time.

I have always had a soft spot for the DEC Alpha architecture. I am a big fan of elegance and simplicity in engineering. Which made me a RISC person. Unfortunately, DEC’s engineering didn’t really survive the sequential acquisitions by Compaq and then HP. And eventually the market proved two things: that ultimately, nobody cares how elegant a processor design is, and that nobody can out-spend Intel on innovation. Thus the Alpha took its place on history’s long list of technologically superior alternatives that got left behind.

Some time around 2003 or 2004, I started using an SGI O2 for a desktop machine (another flavor of retro-tech!), relegating the Alphastation to a corner to live a quiet life as a Web server. There it ran for another 6 or 7 years. I moved most of my important files (including this Web site) to a more modern PC several years ago, but it took me until this year to finally transition the Alphastation’s last duties to other servers.

I sold my-computer on eBay this week for a whopping $382, which, even factoring in inflation, represents a solid profit. How many of your computers have appreciated in value over time?

I shipped it off to Texas this morning. So long, my-computer. It’s been a good 11 years.