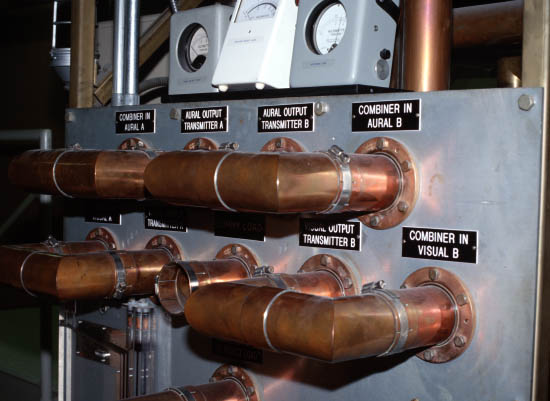 Though a last-minute extension recently pushed the legal deadline into June, for much of the country, analog television broadcasting ended today.

People today underestimate the technological brilliance of the NTSC color television system. At the time of its invention in 1953, it was clear that for a color television standard to survive—there were several competing proprietary systems being tested—it had to be backwards-compatible with the installed base of black-and-white sets. A system that allowed color information to peacefully coexist with a black-and-white picture was an incredible trick of engineering. And the fact that we’re finally getting around to replacing it after 56 years is a testament to its quality.

Thanks to my very brief television career, I have surprisingly fond memories of waveform monitors, vectorscopes, and color subcarriers—things that future generations will regard as mere curiosities. Pictured here is a RF patch panel at the output of WKRC-TV’s dual redundant Harris tube-based transmitters. Copper drain pipe? Hardly! What you see here is nitrogen-pressurized coaxial cable carrying 316,000 watts of RF power (ERP, actually) at 204-210 MHz. It’s a sickening amount of power, and from where I took this picture one could seemingly sense the energy in his body.