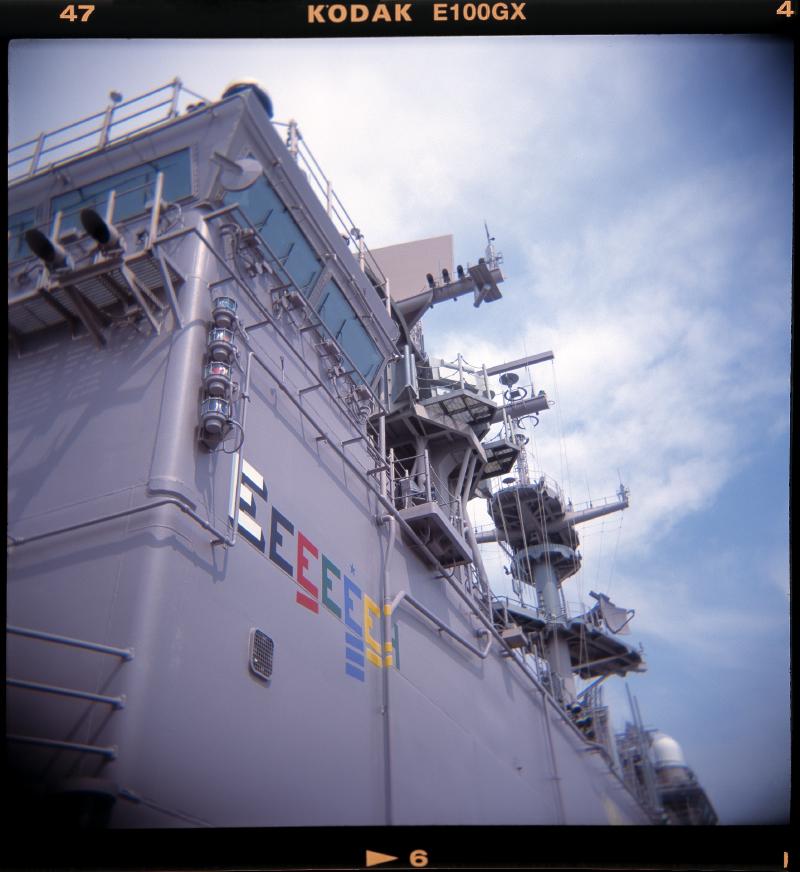 The amphibious assault ship USS Bataan (LHD-5) was docked here earlier this month. I biked over to the jetty to take advantage of the free tour. An 844 ft ship is pretty huge—one could spend days exploring it. The tour was fun, but not very well-balanced. We spent about as much time learning about the Navy’s plastics recycling program (they recycle) and listening to a hygienist talk about dental care at sea (just like dental care on land) as we did touring the cavernous hangar and flight deck.

The ship’s hospital was a major highlight of the tour. Considering the size of the ship, it is monstrous (600 beds) and the medical officer who oversees its operation is bright, funny, and articulate. He impressed us with the many efficiencies he enjoys over a civilian hospital: a private elevator connects the flight deck with the triage room; everything is portable and battery-powered; his digital X-rays can be transmitted and evaluated within minutes by on-call radiologists in Maryland; and, as he put it, “I’ve got 18-year-olds that can stick an I.V.—no need to wait for a doctor.” With a completely straight face he walked us past an operating room in which the lights were turned on and sunglasses-clad mannequins in scrubs were operating on a smiling “patient” whose abdomen was overflowing with spaghetti noodles.

The flight deck is a nice space. There are no railings—just nets down below—which puts the ocean right on the horizon. I don’t want to join the military, but I think I could live with life at sea.