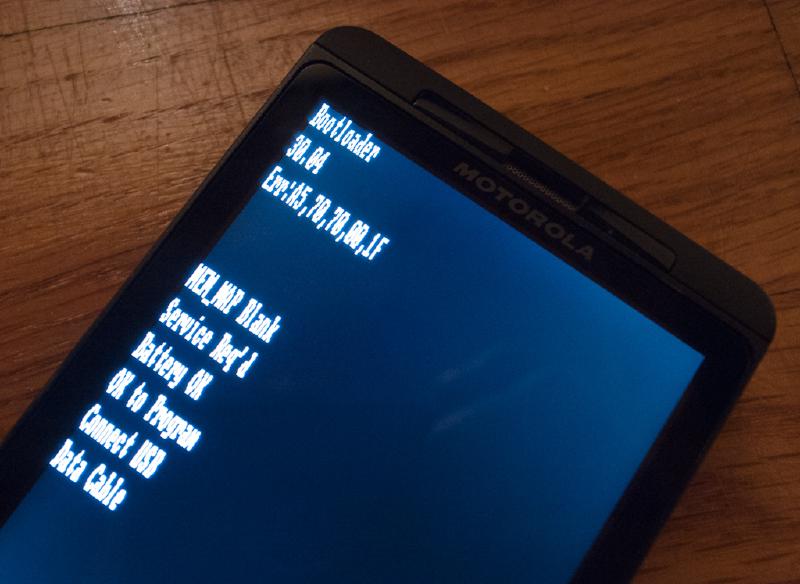 My smart-o-phone (a Motorola Droid X) quit working yesterday. I turned it on in the morning and it never made it past the manufacturer’s logo screen.

No problem, I thought: I’ll just take the phone to the local Verizon store and they’ll sort it out. The cold and laconic representative assigned to my case proceeded to try the obvious “fixes” (pulling out the battery and replacing it!) before slouching in his seat and staring wordlessly at his computer screen for what seemed like an eternity. Finally I asked, “So what do you think?”

Really? I asked him to fix it, please. It looked to me like the memory was corrupt, and maybe it just needed to be re-flashed with new firmware.

“We can’t do that here.” I insisted that it would be such a simple task that obviously the stores would be equipped to do it. He spent 10 minutes poking around in the back room to confirm that they don’t have this capability.

Well, can you repair it elsewhere? Or RMA it and send me an advance replacement?

“This phone is more than a year old. Your warranty expired after 12 months. You’ll just have to get a new one.”

So you’re going to give me a new phone?

So what you’re saying is that my phone, which died in its sleep through no fault of mine, which I have never dropped and never gotten wet, is obsolete and irreparable after just a year and a half, and that my company is now obligated to break its contract and buy a new phone as a result?

Fortunately this smart-o-phone is for business. My personal cellphone is still the first and only phone I have ever purchased: a 2006-era cameraless flip- phone. Of course it’s working great–it still has fantastic reception, decent audio quality, and battery life (about 1 week) unheard-of by modern standards. I guess I have to keep lowering my expectations: of quality, of phones, and of Verizon (as if that were even possible).

Postscript: While I was waiting, a man came in with a trivial-sounding iPhone problem. After performing about 30 seconds of cursory diagnostics, they advised him to try the Apple store. This answer apparently satisfied the customer, because he smiled and said he felt certain that Apple would solve it. People give Apple a lot of credit for their retail experience, but I believe at least 80% of their success comes down to not hiring apathetic morons.