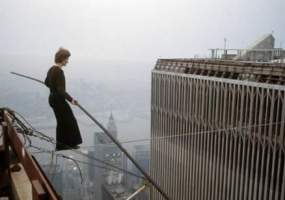 You probably know the tale by now: on a gray August morning in 1974, a 24-year-old French street performer nonchalantly cris-crossed the space between the twin towers of New York’s World Trade Center on a high wire nearly 1400 feet above the ground. But why? And how? Man On Wire (now playing at the Kendall Square Cinema) tells the rest of the story.

For this film, director James Marsh assembles interviews, stock footage, recreations, old home movies, and still photographs into a delightfully nonlinear narrative. Philippe Petit’s personal recollections are captivating. The music is haunting and the visuals are, at times, stunning. But I was completely blown away by something unexpected: that a documentary could stir so many emotions.

A motley ensemble of characters was necessary to obtain roof access, deliver the equipment, deploy the lines, tension the cable, and rig the stabilizers while evading detection by the authorities. Listening to their tales of innovations, successes, and close brushes with disaster teased so many memories of hacking at MIT. But, for all the technical sophistication we enjoyed in school, I realized that our achievements were so insignificant in the shadow of Petit’s work. He was seeking to do something beautiful for beauty’s sake. Why walk between the towers? Because they were there. The Port Authority police sergeant who arrested Petit describes, in file footage of a news conference, what happened. And in the course of his explanation, he does something remarkable—he steps out of the shell of his police officer persona and tells us, with some bewilderment still in his eyes, how grateful he was to unwittingly become a part of the story.

See this movie at once.